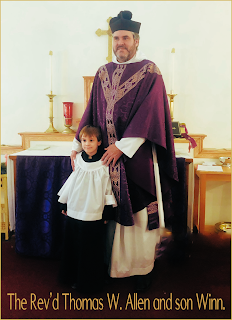 Fr. Allen is from Greenville, South Carolina, and a graduate of Montreat College in Religion with a concentration in history.

He earned a Masters of Divinity from Trinity Episcopal Seminary Pittsburgh, Pennsylvania. Fr. Allen has served in the Anglican Province of America and the Episcopal Church.

He particularly enjoys preaching from the prophets and being an extrovert.  Prior to his receiving Holy Orders, Fr. Allen served as a deputy sheriff and in construction. Fr. Allen was ordained by Bishop Walter Grundorf in the APA.

He enjoys long walks, hiking, the outdoors, and the beauty of Alaska. His two children occupy much of his time and he loves it!

Fr. Allen has much experience in church development- a gift well suited for this growing community that is preparing to build a new sanctuary on its property off state route 33 and Winn's Church Road in Hanover.

We look forward to his guidance and pastoring and know he will be an asset here as well as in the larger community of the Henrico and Hanover area.

A hearty welcome to Fr. Allen and family!

Written by John Dixon at 4:49 PM No comments: 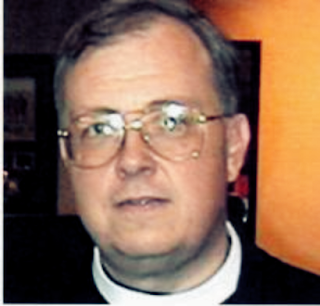 On this Feast of the Pentecost 2021, our vestry and officers met to honor our founding priest Fr. Charles Nalls who has done so much for our parish and for so many, contributing much toward our common struggle to uphold orthodox Anglican faith and practice in the United States. An honorable priest whose gifts and efforts have made a notable and positive difference in our collective movement.

We wish him Godspeed and continued success in his current ministry as rector of The Church of the Epiphany in Amherst Virginia.

WHEREAS, the Reverend Canon Charles H. Nalls has faithfully served this parish as a priest and steward, and;

WHEREAS, beginning in 2002, at the request of strangers, Canon Nalls did not hesitate to answer our plea for help and pastoring, and by his dedication to his calling as a shepherd to the sheep of Jesus Christ, did sacrifice his family time, his fortune, did drive hours from Maryland to southern Virginia each week to found and build up this fledgling mission as our shepherd and priest, refusing stipend so that funds could be spent in the service of the flock, was and is ever willing to help ensure the success and continuation of the delivery of the Gospel of our Lord Jesus to the faithful here at Saint Athanasius, and;

WHEREAS, during the same period offered his dedication, talent, expertise, through the Canon Law Institute, did uphold orthodoxy in defending Anglicanism by defending faithful parishes and missions from attempts to strip or ensnare their properties, did represent, often at no cost, and defend fellow traditional Anglican churches, vestries and clergy, for the greater good and preservation of the Continuing Anglican Church movement, and;

WHEREAS, at the same time, without financial help from any diocese or archbishop, he did pursue ongoing higher theological education, earning various theological degrees, and did graduate with highest honors from Dominican House with a teaching degree, a rarely held honor in the Continuing Church, so as to benefit all those in this and other flocks, and;

WHEREAS, during his service here and afterward he also worked for the future of Anglo-Catholicism as a mentor of other clergy and developed the Charles C. Grafton Institute for the instruction and formation of seminarians in the training of their pastoral skills and priestly practice, faith, duties, and obligations to the advancement of our collective movement in the Continuing Church, and continues to counsel traditional Anglicans and other Christians on legal issues as an expert witness on Anglican polity and property issues, and;

WHEREAS, to honor his commitment to the Baltimore Declaration and the Affirmation of Saint Louis, and;

WHEREAS, before, during, and after his service here, he served in leadership positions in various associations such as the Board of  The Christian Challenge Magazine, the Fellowship of Concerned Churchmen, and other bodies working to preserve the faith once delivered to bring the influence of the Church of Christ where it would produce fruit in the culture, and;

WHEREAS, he also served his country 20 years in the Navy Reserve as a patriot and Naval Officer, returned to service in the state of Maryland as a chaplain, in which he commanded chaplain corps in both the Maryland and Virginia military departments at the rank of Colonel, received the Maryland National Guard’s highest state award- the Maryland Distinguished Service Cross, and headed a number of patriotic and veterans groups, notably working as the national Chairman of American Cold War Veterans, and;

WHEREAS, Canon Nalls always has conducted himself with love, humility, humor, wisdom, integrity, courage, and self-sacrifice, in the duties of his priesthood;

NOW, THEREFORE, BE IT RESOLVED, that this Vestry of Saint Athanasius Anglican church recognizes the Reverend Canon Charles Hart Nalls for his distinguished service to this church, and our Continuing Movement, of which there can be no doubt, that without his devotion to our Lord Christ Jesus, and to his flock and fellow churchmen, that our Movement would be both poorer in spirit and progress, and so, we, with much respect, heartfelt gratitude, and love, bestow the title Rector Emeritus and that Canon Nalls be ever welcome to preach and dispense the holy sacraments at our altar.

RECOMMENDATION: That the above resolution recommending the Reverend Canon Charles Hart Nalls for emeritus status be approved May 23, 2021 by this Vestry and parish officers:

Does Your Modern Bible Version Have a Presuppositional Bias?

We are planning Bible Studies at Saint Athanasius Anglican Church that will use a lightly updated Tyndale translation from the Greek New Testament.  You may ask why would we use an early English translation from the Greek that was even before the King James Version when we have modern versions that are easier to read and probably based on more accurate Greek manuscripts?  Putting aside the more complicated arguments of textual criticism of the Critical Text verses the Textus Receptus, the Tyndale translation we are using has been lightly updated and is easier to read than the King James Version (updated in 1769).  Tyndale’s translation comes from the Received Text or Textus Receptus but apart from the focus on underlying Greek texts I would draw the reader to the presuppositional bias in modern translations imposed upon the Greek New Testament.  For William Tyndale and the Protestant Reformers, they were seeking the new learning from the Greek New Testament now available to them to translate by formal equivalence into English the message of the Gospel on how believers by faith were made and sustained in the one true faith.  This was their focus and so we can rely on their translation because they had no other theological agenda.  The scholar Ruth Magnusson Davis compiled the New Matthew Bible from Tyndale’s New Testament translation and study notes of William Tyndale and John Rogers, both men who sealed their testimony with their blood as martyrs burned at the stake for translating the Bible into English.  Ruth Magnusson Davis in her example below shows us how modern versions show in translation a presuppositional
theological bias imposed on the translation. Ruth Magnusson Davis published an example of the difference in doctrine from a modern translation of Revelation 10:6 from translations from William Tyndale along with other 16th Century Bible translations including the King James Version (1611).

Ruth Magnusson Davis writes: “The Reformers believed that when the Lord returns at the close of this age, he will usher in the end of time, and the end of the world as we know it.  The earth will burn with fervent heat, as Peter says in his Second Epistle.  But in recent times this doctrine has been replaced in popular understanding by the doctrine of a literal 1,000 year rule of when Christ returns.  This is called Premillennialism.  Even teachers I respect teach this doctrine of Premillennialism, and part of the reason why is that modern ‘translators’ have changed the Scriptures to accommodate Premillennialism.  A dramatic illustration of what these translators have done is with Revelation 10:6.

Revelation 10:5-7 in the New Matthew Bible: And the angel which I saw stood upon the sea, and upon the earth, lifted up his hand toward heaven, and swore by him that liveth for evermore, which created heaven, and the things that therein are, and the sea, and the things which therein are: that there should be no longer time: but in the days of the voice of the seventh angel, when he shall begin to blow: even the mystery of God shall be finished as he preached by his servants the prophets.

The meaning is, when the 7th angel begins to blow his trumpet, time will be no more.  Creation and time will be swallowed up in eternity as the mystery of God is finished.  A similar rendering in found in older Bibles consistently right through to the King James Version.

However, beginning with the Revised Standard Version 1946, the sense is changed.  Modern Bibles have here that there will be no more delay.  It is important to understand that the difference has nothing to do with the underlying Greek manuscript.  The Greek is the same.  It is simply that modern versions have reinterpreted the Greek to accommodate Premillennial doctrine.  They say that this verse means that after the 7th trumpet, there will be no delaying the thousand-year reign of Christ.  Since this means that time will continue for another 1,000 years, they have to change the Scriptures.  This truly is enormously significant.

Watch the progress of translations over the centuries and see what happens when the Revised Standard Version comes along:

The New Matthew Bible October Testament stands alone among all the moderns, both Roman Catholic and Protestant, in guarding the historic doctrines of the Church and the Reformers.”

This is why we are inviting people in the Richmond Virginia area to our unique forthcoming Bible Study in October.  Time and location will be announced soon.

For more information about the New Matthew Bible:
newmatthewbible.org
octobertestament.com


Written by Robert Placer at 12:19 PM No comments:

What Should Be Expected From Youth Ministry?

I know from experience that youth ministry is often a major source of contention in the local church.  The youth minister whether a layman or an ordained pastor is usually the target of so much dissatisfaction from the congregation.  Youth ministry ought to be about a transition from youth into adulthood.  The adults in the congregation should invite the youth into adulthood within the church and preparing youth to take over lay leadership positions in the local church ought to be one of the purposes of youth ministry.  Even though in our society we tend to prolong the culture of youth the biological reality is that youth is less than 10 years and then biologically our youth become young adults.  How to invite youth into adulthood is the approach of Peter David Gross Executive Director  of Wheatstone Ministries www.christianadulthood.org
Peter David Gross in the photo below is a fellow Anglican and member of Saint Matthew Anglican Church in Newport Beach California.  Take a look Readers at the website for Wheatstone Ministries and let me know what you think about his approach to youth ministry. 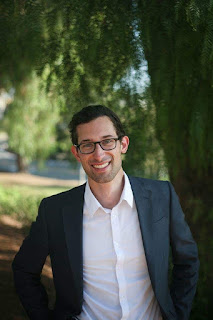 Written by Robert Placer at 1:57 PM No comments:

(Check out our new site) 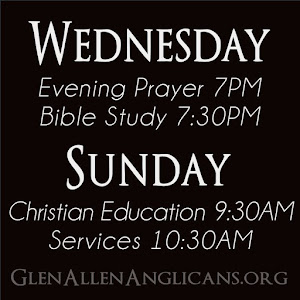 Via Media: Not adding to or subtracting from the doctrine of the early and undivided Church. Member Anglican Province of America

We are an APA Anglican church near Richmond Va in Glen Allen. Christ crucified preached here.